Lessons Learned from Life on The Trail

At the Southern tip of the Andes, on what you might term the ‘ankle’ of Chile, sits the ominously named Torres del Paine [translation: Towers of the Paine] national park.

In the already hike-wealthy region of Patagonia, this Parque Nacional is the crown jewel.

Attracting hikers from the world over, Torres del Paine is home to some of the most stunning and challenging trails the world has to offer.

I am not a hiker.

ARTICLE CONTINUES BELOW THIS AD

My greyhound-like frame may appear to be suited to speed and efficiency, but the last time I involved myself in physical activity was when running was the only solution to the problem of possibly missing a McDonald’s breakfast.

Torres del Paine offers two main trail options: The 5-day W Trek, which, would you believe it, forms a W shape around the southern reaches of the park’s central mountains, and the up to ten-day Q Circuit, which worms it’s way around the central mountains in, blow me down, a ‘Q’ shape.

My girlfriend and I decided to tackle the smaller of the two circuits.

The W trek would take five days, and for all of those five we would live entirely off our own backs, lugging around our house (tent), our sustenance (a lot of powdered mashed potatoes), and all of our worldly possessions.

I live a comfortable life.

As an inhabitant of earth, I am an exceedingly lucky man.

To be born in a wealthy country, to good parents, and be able to easily find a well paid job, in terms of humankind I am very much the statistical anomaly.

This accumulation of circumstance has meant there have been minimal (read: zero) times where I’ve had to either battle to the elements or carry my life on my back.

We attacked Torres del Paine in November, which, in the Southern Hemisphere, meant we hit what would usually be the exceedingly pleasant last month of spring. In Southern Chile, however, weather doesn’t work like that.

The mountains at the park’s centre form a famously unpredictable micro-climate. An intense sun can be covered by snow dumping clouds in literal seconds, and a perfectly still day can turn into a tornado-level wind event at the snap of your fingers.

And while the summer months of January and February can often bring some form of stability to these hellish conditions, unawares to us, we’d landed in what some referred to as ‘bridge season’, where conditions became irrepressibly dicey.

ARTICLE CONTINUES BELOW THIS AD

Over the next five days, I was subject to an exercise in introspection and humility the likes of which I’d never experienced.

Life on the Trail

The nuts and bolts of the actual goings-on aren’t, in all honesty, terribly exciting. We hiked, we snacked, we hiked some more, we cooked, we ate, we slept.

What this simplicity did though, was take everything in my life – the obligations, the stresses, the hopes and dreams – and completely remove them. My existence became simpler, and, dare I say it, more beautiful.

Life consisted of one thing: putting one foot in front of the other. Nothing else mattered.

There was no phone vibrating. No alarm ringing. No emails to check. And this sense of simplicity was fed even more by the fact that, in the middle of the wilderness, you (and your perceived troubles) start to feel irrelevant.

Surrounded by the stunning beauty and the ever-changeable weather, you start to see Torres del Paine as a living, breathing thing.

She doesn’t care whether you’re the Queen of bloody England. In fact, you start to wonder whether she knows you even exist.

Everything else in your life falls into insignificance.

You’ve got one job: just get to the next camp by sundown. Whether that is by running from tree to tree avoiding a hailstorm, or trudging through half a foot of snow in your ill-conceived Nike Free Runs, you just have to get the job done.

Torres del Paine was named after the Towers that grace its centre.

They are as beautiful as they are a bastard to get to. If you attack the W trek from West to East, you’ll be scheduled to make the hike up to the towers on the final morning, from a camp that sits around an hour’s hike down the mountain.

The morning of our ascent, we woke to what seemed to be a burly team of firemen hosing our tent down. A peek outside confirmed the worst – it was a deluge. The rain would’ve made it impossible to make the climb to the towers.

So we patiently waited for it to ease.

A couple of hours later, the rain seemed to start to slow, then finally stop. We got dressed, then cracked the tent open to see that the rain hadn’t, in fact, stopped, it had simply frozen.

The equivalent amount of moisture was falling in the form of a snow-storm, but at this point, it was too late to back out. We rugged up and hit the trail. We made it to those towers. And they look incredible.

I know this because I’ve seen photos. On that day, we couldn’t see more than ten meters in front of us. And you know what? We weren’t phased.

You’d think that after slogging through gales, hail and blizzards, you’d want your chocolate cake at the end.

We’d already had our chocolate cake. The phrase ‘it’s not about the destination, it’s about the journey’ is horribly overused. 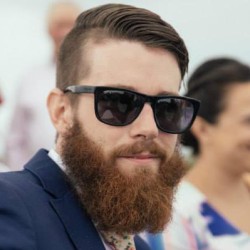 Michael Catford
Writer at Look What We Done
Michael has a love of travel. That quickly developed into a love of writing while he was trying to document his adventures. A bearded Australian with a taste for sport and beer, often simultaneously, the web content knowledge gained from running his own travel site has allowed Michael to expand his fields of expertise, and he has become a full-time freelance writer as he trots the globe.

A warm welcome to The IPS Podcast, the podcast of The IPS Project, the educational platform on life.

In this podcast hosted by Jellis Vaes, the founder of The IPS Project, you can expand your knowledge about life topics that we learn little to nothing about growing up—topics such as mental health, relationships, the workings of the mind, etc.

We will learn about them from experts and people from all walks of life.

IMPROVE YOUR QUALITY OF LIFE