The soup was thick with pungent cheese that clumped together and chunks of bread bowl that softened and floated to the surface. The feverish sun that had just the day before, been greeted with pallid exposed knees and ice cream on terraces, had been replaced by dark glowering clouds and a fierce wind.

It was my second full day in Bratislava, Slovakia and despite the ominous forecast I was determined to visit Devín Castle outside the city center.

When I asked the receptionist at the hostel that morning for directions, she responded with enthusiasm, thrilled I wanted to explore her country. Most travelers use Bratislava as a daytrip from Vienna or a stopover to Budapest, she explained with a sigh.

I arrived early to the bus station under the Bridge of the Slovak National Uprising or Novy Most, the communist relic endearingly nicknamed “The UFO Bridge.” I wandered around the damp underpass, cocking my head curiously at the boldly painted images of hooded villains and droopy-eyed soldiers that populated thick supporting columns.

Directly in front of the bus stop was a massive mural of a greying, decorated soldier sitting on a bench surrounded by airdrops and tanks invading a distant, anonymous city rendered in black-and white. These ghosts were like the tenderness in the skin of an old injury, leaving behind a film of history that would color the rest of my experience in Bratislava.

I boarded the bus with three white-haired women and their canvas pushcarts. I wondered what their lives had been like when Bratislava was attacked by the Allies, occupied by the Germans, and absorbed into the Eastern Bloc.

I looked at hands clutching black pocketbooks and eyes blinking behind wire frames—what had they touched, what had they seen? The bus took us over the UFO Bridge, leaving behind baroque palaces and medieval towers, and entered small villages characterized by dense forests thick with mossy trees.

The bus stopped at Devín and I alone walked onto the narrow street. I was met with a malicious wind, against which my raincoat was no contender. In vain, I looked for signs of life. The stucco buildings were unadorned, offering no clues as to what lie inside.

I did not see the ruin known as Devín Castle and with the wind increasing in strength, I started to worry I would be caught in a serious storm. I continued down the road until I found a break in the rows of housing. There, in that all-revealing space, I saw the castle. After a series of turns and a shortcut, through what I later realized was likely someone’s private flower garden, I found myself at the base of Devín Castle.

It was grander and more primordial than I had expected. Still fighting the wind, I walked past deserted food stands advertising Halušky, the traditional Spätzle-like potato dumplings topped with bits of bacon and heaps of a tangy sheep cheese known as Bryndza.

I recalled with a smile, the Halušky I enjoyed the night before at Viecha U sedliaka, a traditional Slovak pub recommended by the hostel receptionist. I was the only tourist among a splattering of tables occupied by smiling men marked by deep creases evidently caused by decades of laughter.

The waitress disappeared for over an hour and as I digested the terrifically heavy meal, I listened with delight to the melodic vowels spoken between eruptions of laughter.

I looked to the sky and imagined the chuckles of the night before absorbed into the clouds, echoing back to earth as thunder. I approached the castle and followed a sloping cobblestone road to the monolithic gateway resembling something straight out of Game of Thrones. Picturing gladiator sandals, wooden clogs, and my own black Nikes, I thought of the countless feet, which, over centuries, had crossed this threshold.

I wandered up a healthy hillsides dotted with golden wildflowers, pausing to admire a white stone statue of a woman, her hands solemnly clasped together, her headdress blowing in what I can only assume is a perennial wind. She appeared the sole sentry keeping watch over land occupied by everyone from the Celts and Romans to the Ottomans and Habsburgs.

The castle itself was under construction and I watched in awe as men in reflective safety vests shoveled stones into a small cement mixer and lifted buckets using a pulley system to an impossibly high platform at the top of the castle.

When the clouds finally splintered, releasing heavy raindrops, I went back down the hill and into an establishment unimaginatively named Restaurant Devín. I settled into a seat by the plastic window where, the streets absent of people, I could watch the sky. Shortly after ordering a bowl of garlic soup, the same construction workers I had seen earlier entered the restaurant.

They sat huddled together in a mass of arms and shoulders. As I was served a steaming hot bread bowl, so too were they.

I had traveled alone before, but in cities like Vienna and Istanbul I made friends quickly. English was the lingua franca and at every street corner another young traveler puzzled over whether to turn right or left. Here in Bratislava, I lapped up spoonfuls of cheesy garlic soup, in what felt like solidarity with the construction workers slurping from their own bowls.

I smiled in gratitude, thinking about the quiet stillness in which I was experiencing a new culture. Bratislava was a different kind of travel adventure. I was not faced with peril, but I was challenged to stop and pause. Devoid of a fellow companion, I found myself acutely observing the Slovak people and the Bratislava landscape in unexpected ways.

Had I been with a friend, I may not have analyzed the mural in the bus station with such depth, nor would I have considered the women on the bus with such curiosity. In the sleepiness of a quaint city not yet fashionable, I discovered the power and pleasure of solitude, of traveling with my thoughts and observations as the very best companions. 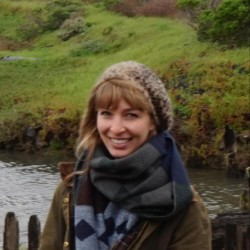