– An International Incident of Love –

Camille and I met through mutual friends that brought us together in a gathering that sought out love and the miraculous each day. With hands laid, the lame walked, cataracts where healed, spines realigned, legs grew, and what sprung about was a faith that believe we could raise the dead and literally move mountains. Each day we grew further in love, empowering ourselves to share that love.

Each day we traveled, choosing to step outside our door. We we’re ordinary people seeking out and expecting extraordinary experiences.

Shortly after our friendship started I flew away for a job in Saudi Arabia where I was assigned to teach for the next two years. Camille and I started a conversation thread, Apples and Oranges, which included a series of questions on our preferences, beliefs, and the history of our lives. We grew in love through the words written on this thread, Skype conversations, and Facetime sessions.

I found myself, split between the Middle East and my heart finding itself yearning to go back to the Philippines, so I made a decision. 3 months into my teacher stint in Riyadh I found myself in the principal’s office, firing my boss and taking further control of the direction of my life against the advice of many people. I told my friends, colleagues and family I would be leaving Saudi to get with the girl I was going to marry (even if she didn’t know it at the time).

Shortly after, we went from being just friends into a more intimate relationship. Being in the middle of the school year it was difficult to find work as a teacher. So for the next 7 months we would spend every day together getting to know each other.

We went on planes and canoes, we ventured out to remote islands, sat under waterfalls, road tripped to volcanoes, and held each other through many shared experiences. Looking at each other intensely and taking in the surroundings we learned something very quickly, we were very different.

Love has it complications

We were complete opposite from personality tests (I am an ENTP while she was an ISFJ based on the MBTI personality inventory), likes and dislikes, and especially culturally. She grew up in a very collective society surrounded by a tight knit family in the Philippines.

And, while I was full blooded Filipino I was very “American” in my ways. Often times emotions where her basis for making decisions, while for me a black and white presentation of logic would give me a clear direction.

With the way we see the world there was no better balance than for us to wander around the globe hand-in-hand falling in love not just with each other but with each destination we set foot in. In travel, we expose ourselves to cultural differences, we find understanding, acceptance and respect. Love isn’t much different.

Travel a distance for love

The following school year I got a job in Shanghai, China and after courting Camille for the last 7 months it was time to be apart… Working then running online to have a chat through China’s Great Firewall and the Philippines terrible internet was frustrating. Being any distance away from each other after intimately growing together was a complete 180 and a huge tug on our hearts.

Eventually, Camille moved closer, finding a job in Singapore. Of course we had the occasional visits but that wasn’t enough for us. Over a weekend we flew to Hong Kong on a Friday, I got down on one knee on Saturday and she said yes.

The following day we parted ways going back to Singapore and Shanghai. It was the happiest of days for us but also a bit of a downer, being engaged for less than a day and then separating to continue the long distance game.

You know that scene in the movie when the girl gets on the train and the guy is on the platform looking at her go away, that was us at the Hong Kong airport.

The answer to our love clash

That summer we decided to get married. Instead of waiting for the perfect time, we ended up having a civil wedding and deciding to have a celebration ceremony sometime down the road. Shortly after, Camille moved in to what was a bachelor’s pad (aka my apartment)- bare walls, pizza boxes and beer in the fridge and a TV.

Camille is an interior designer by profession and over the next few years she created a welcoming home for the two of us plus Pepper our French bulldog. With the cultural differences, Camille having had just settled in Singapore, then being uprooted to move to China where she knew no one, had no job, and little grasp of Mandarin, it was a tough transition.

I, on the other hand, had my group of friends, my routine for work and my weekends, and had already lived there for a year. As a result, the first year of marriage was tough and we found ourselves not agreeing on our many aspects of our daily lives. At the end of the school year we decided to use the summer break to travel through Cambodia and China’s southwestern provinces over a 40-day period.

This was the start of our addiction to couple traveling and a breath of fresh air in our relationship.

Travel in love, love in travel

Eventually, we ended up agreeing to a year-long honeymoon we called 365traveldates, a name we came up with during a Valentine’s dinner date in Shanghai at a Brazilian steakhouse! We had our celebration ceremony a year and a half after our civil ceremony and then started saving up for our honeymoon.

We deconstructed the idea of a 2-week honeymoon and realized it was an absurd amount of time to celebrate the love we had for each other. Although we planned on one year we ended up traveling for over 16 months before inadvertently settling down in El Nido, Philippines, to build a glamping site called The Birdhouse.

Ultimately the lesson of travel has been one of love. We moved through this world with the motto- Travel in love, love in travel. This can be a truth in our daily walk to work, our vacation to that all-inclusive resort in the Philippines, or on a backpacking trip cramped in a chicken bus through Guatemala. What better way to date your spouse and see the potential of your relationship than to jump into exotic settings, indulge on incredible culinary dishes, and bond with strangers turned friends. It’s a love worth sharing and that’s what we did.

So how has travel helped your love life? 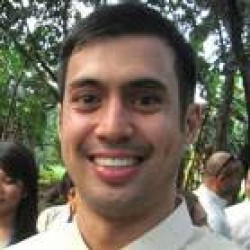 Mark-Anthony Villaflor
Blogger at 365 Travel Dates
A one-eyed Filipino American with an amazing wife. Left his French Bulldog in the states to go on a year long honeymoon with his wife. Lover of basketball, travel, education, and reading. Currently trying to deconstruct and unlearn my formal miseducation. Breathing, smiling, and giving thanks each day! 50% of 365traveldates.com