The Lies and Misconceptions We Tell Ourselves

I got out of my apartment. That’s how this story starts. To be completely honest I had invested so much time and money into my comfortable crib in Rotterdam that I seldom wanted to leave it.

Watching a good movie was almost always more appealing than getting out of my comfort zone to do social stuff. But this was a special occasion.

My friend Joao had invited me to a concert (anyone inviting me to anything was rare enough for me to ignore the invitation) that was – on top of everything else – free. So, I got out, unlocked my bike and set off towards the concert venue.

I didn’t know it yet but I was about to (re)learn two majestic life lessons.

When I arrived, Joao wasn’t there, which I had kind of expected as he is Portuguese. As I nervously waited for him I got a call from another friend.

He had seen me on my bike and wanted to know where I was going and if I wanted to go chill with him and his girlfriend at a bar they were at.

I was astonished, I wasn’t getting many invites at the time and that was the second in 24 hours. I politely declined and offered to go hang out with him after the concert.

When Joao finally arrived, I was happier than ever.

While we were talking I asked him how he had got the free tickets and he explained an insane story of how, at a low point in his life, he’d been to a concert where he had started talking to some people and ended up backstage in the VIP room of the festival with unlimited champagne and pretty girls and where he also met some festival organizers who asked him to volunteer from time to time and… anyway, one thing led to another and he got the free tickets.

I knew my friend Joao was just the kind of guy who would be the hero of that kind of story but I didn’t know that getting out of your room could take you that far.

During the concert I reflected on how awesome it was to share that moment with Joao and his friends. I had hardly ever been to a concert before and I was having a fantastic time.

To me, the evening was already a success.

I had gotten out of my room, had met new people at a cool free concert and afterwards was going to chill with another friend. It certainly required more effort than sitting on a couch but the benefits and feelings I got out of it were a thousand times better.

At the end of the concert, I met the organizer of the festival and she asked if I wanted to be a volunteer next year.

I said yes right away. That night I understood that “life” was happening outside with real people. Not in movies.

Nothing happens in your living room.

Later as we were queuing at the bar I was chatting with Joao and one of his friends, and fate led us to start talking about hair color. I was about to learn my second life lesson of the night.

One thing you need to know in advance is that I am half-ginger. Half, because I am blond during summer and ginger during winter. As stupid as it may sound, I developed an enormous complex about it when kids at school started making fun of me because of my hair. I hated it.

I hated it so much particularly as there was nothing I could do about it and actually, to my mind there wasn’t anything really wrong with my hair. But people kept on making fun of it, and my confidence kept on being shaken.

As I got older the problem got worse and I eventually decided to move out of Belgium (it wasn’t the only reason, but it was certainly one of them). As nobody ever made fun of me whenever I was in an international environment (or at least a non-French-speaking one) I decided to keep things that way.

And then, all this time later, here I was at this concert, talking about ginger hair for the first time, with someone I’d only met a couple of hours before.

At one stage, I declared that “societies have a problem with ginger people. Everyone makes fun of them and they are not protected by any kind of organization while the racist insults towards them are as violent as they are towards other victims of racism”. Joao looked at me. “Are you ashamed of being ginger?

Being a ginger is the coolest thing about you man, and you are not even really ginger by the way…” I looked at him shocked. “You never watched South Park?” I asked him. “They make fun of gingers all the time, that is the least cool thing to be”. My statement was correct, but it covered only one part of the reality, that one part that I was focused on.

“South Park makes fun of everyone, Joao said, Blacks, Asians, Jews…everyone! Once you are different, people make fun of you. Trust me, your hair is awesome”. I thought he was making fun of me but all his friends were there to support him.

Being ginger is cool.

At least for them, it was. For real. The earth shook. I had built my international life on the run from mockery and laughter because of my hair color.

And here they were telling me it was cool and that they wanted a bunch of ginger kids. I was shocked. Not only because suddenly I was cool, but because I had been wrong my whole life on something that was really important to me and that I assumed was a universal truth.

If I was wrong on that, what else was I wrong about?

What other stupid principals have I built on something that wasn’t important or even correct? How many other psychological barriers had I built for myself? That thought reminded me of another one that had struck me a couple of days before while watching “The Fog of War”.

It is a documentary about  David McNamara, an ex-foreign affairs secretary where he takes a look back on his life and explains the eleven lessons he learned – one of them being “belief and seeing are both often wrong”.

And he was right.

By basing our assumptions on what we assume to be true (and false), we can end up costing ourselves a lot. It can result in us becoming depressed, suffering from low self-esteem, being hurt, or wanting to hurt ourselves or others, simply because our knowledge is based on inaccurate or incomplete information. Where I grew up, ginger people were mocked. In other parts of the world, they are considered handsome. I had created a reality for myself based on other people’s fears and I had based my own quality as a person on that mockery. Now that I have seen that people enjoy my presence and personality and that I am as much a person as everyone else, I have finally embraced who I am and found peace within myself. And that beats every other achievement in the world. 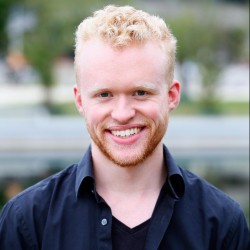 Auré Fau
I am a student in communication and media at the Erasmus University of Rotterdam. I am also a comedian (Les Profs 2, Zone Blanche, Crazy Sheep...) and I like to direct my own short movies.